Tips for Hauling Your Stuff Through Empire

Hauling your ships and supplies through empire, there are several things to keep in mind:

How to create courier contracts

Things to keep in mind when making courier contracts:

If you try to place an assembled ship into a freighter, the game will give you an error message and tell you freighters cannot accept assembled ships. However, there is a way to get around this. You can place assembled ships into cargohold of a freighter or a jump freighter if you package them into plastic wrap first. To do this, select your assembled ships and create a courier contract to your hauler alt. Keep in mind that assembled ships do take significantly more space than repackaged ships. An frigate hull will be anywhere from 19,000m3 up to 28,000 m3 in size. A cruiser will be approximately 80,000m3 to 120,000m3 in size. Battlecruisers will be in the order of 270,000m3 and battleships around 500,000m3. A freighter has cargohold of 830,000-980,000K m3 depending on race of freighter and skill of pilot and thus can haul about 30 assembled frigate-sized ships, 7-9 assembled cruiser-sized ships, 3-4 battlecruisers or single assembled battleship.

Important! Breaking courier packages instead of completing them voids insurance on ships that were inside the courier plastic package. If you are transporting insured ships, make sure to complete contracts instead of breaking plastic wrap packages to retrieve the ships with your freighter alt. This will preserve your insurance.

Suicide ganking is a form of high-sec piracy where players seek out ships that are transporting valuable goods. Once found, suicide-gankers kill them, getting destroyed by Concord in process, and use alts to scoop up the contents of hauler's wreck. This activity is profitable because insurance payout on tech I battlecruisers and battleships almost completely covers the cost of ship and insurance fee. Maximum what suicide gankers lose is 5-20 million on their ship and modules. Statistically about half the ship's modules and items in cargo drop. Suicide gankers thus break even on killing haulers transporting just 50 million worth of loot. This activity requires that you sit on a highsec gate for hours, lose some security status and a few battleships, so of course you'd want to make at least 20 mil/hour profit on top of breaking even which means that around 100 million ISK is where the cargo contents of your hauler start to look lucrative to a suicide ganker camping a highsec gate in his battleship. Of course even empty haulers have been known to get suicide killed in empire just for practice or out of boredom.

Great majority of suicide ganking operations consist of one player piloting two characters. One is a gank-fitted battleship; second is a scanner-alt. Gank fitted battleships get fitted to do maximum alpha damage. Suicide gankers aim to kill haulers with one, maximum two shots to ensure that they hauler goes down before sentries and Concord destroys their ship in retaliation. Tempests are thus very popular to use for this activity because Minmatar artillery has the highest alpha in game (but lowest rate of fire). Armageddons are also quite popular because they do EM/thermal damage and can sneak in a few shots due to having good rof. These battleships are not tanked or rigged and are often fitted with just meta 1-2 modules - turrets/torp launchers, warp disruptor, weapons upgrades, target painters, tracking enhancers and tracking computers. Primary damage type that suicide-gankers aim to do is EM and thermal because most haulers are shield tanked meaning that EM and thermal are often lowest resistances on a hauler.

Most often suicide gankers pick high traffic lower-security systems like Uedama and Niarja to do their business in. In these systems Concord response is slow and you can go down to -4.0/-4.5 before you'd need to rat up your security status again. These systems are also en route between major trading hubs meaning they get lots of hauler traffic. Some suicide gankers stalk Jita or gates that lead out of major trading hubs. They lose more security status but also get to juicier haulers before the guys camping lower down the "hauler" pipe. The scanner alt is often parked a system or a gate in front of where the suicide ganking battleship sits. It is armed with passive targeter, ship scanner, and cargo scanner. With passive targeter the scanner alt is able to lock ships without their pilots seeing yellow flashing brackets on overview. This way targets are not alarmed that they are being locked for scanning. The ship scanner is used to scan modules fitted on haulers to estimate their tank. The cargo scanner scans contents of cargohold to estimate their value. Depending on where the scanner alt is placed this gives suicide gankers 10-60 seconds to estimate whether or not you are worthy of a gank. When faced with doubt many will prefer to err on the side of safety. Setting up your ship and cargo to place more doubt into their minds thus will increase chances of safe passage for you.

Suicide ganks of freighters happen more rarely because pulling down freighters requires more specialized setup - a medium-sized gang of 15-20 people in battleships and a freighter to scoop up the loot. These gangs also require prior preparation - 20+ replacement battleships set up and ready to go in system. While hauler kills can happen most anywhere in EVE freighter suicide gangs for the most part happen along routes between major trading hubs. To not look suspicious battleship pilots sit just a bit off grid aligned to a gate. Once their scout reports a juicy freighter coming in they all warp to the gate and take it down (this is the same tactic pirates use in lowsec when camping gates). If you are hauling valuable items in your freighter it is a good idea to run a scout through the route first and see if you can detect any freighter suicide gangs along the way. If you run a 360 scan around the gate and pick up 15+ mixed battleships within close proximity on your directional scanner, this might be it.

Other ships in danger of being suicide ganked are shuttles, frigates, and interceptors. These ships have very few hit points and can be killed in one shot by destroyers or cruisers. It is more difficult to catch these small ships and scan them down because of their fast align time and speed. However it does happen. 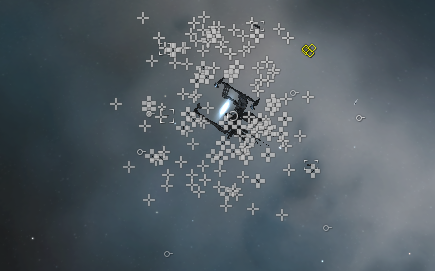 Aftermath of a frieghter gank. Concord swarming over the gate and several yellow cargo cans give a hint to what might have transpired on this spot recently.

Tips for Avoiding Getting Suicide-Ganked

The cloack/mwd trick often gets employed by players to run 0.0 camps. And same can be done in empire. If you would like to transport a medium-sized load of high value goods, purchase a transport ship (cargo size around 28-30K m3), fit it with 10MN microwarpdrive and a cloak. When jumping through the gate, initiate alignment to the next gate, hit cloak and then immediately hit your microwarpdrive (yes, indeed hit the cloak first). You will see your speed first spike then fall as cloak is being activated, while your ship is aligning to next gate. While the velocity of your transport ship is still over the maximum velocity of it with cloak deactivated, initiate warp to the next gate. The cloak basically hides you from being locked while you're performing this maneuver and mwd allows your ship to quickly get to 75% of subwarp speed needed to initiate warp.

When you come out on the other side of the gate, your ship will be at full stop and cloaked. This gate cloaking effect lasts for 1 minute. Once you order it to warp to the next gate, the time it would take it to enter warp is simply the time it takes it to accelerate to 75% of its subwarp maximum velocity. If your hauler's max velocity is 100 m/s then once it picks up a velocity vector of 75 m/s in direction towards the next gate, warp will happen. Because TQ server treats ships as balls with engines growing out of anywhere the physical alignment of ship module you see on the screen actually does not matter (this is why you will sometimes observe ships warping sideways). So, the only thing warp is dependent on is accelerating up to those 75%.

To speed up this acceleration freighter and hauler pilots do a specific trick with a second character. They web their own ship. This decreases its maximum velocity but does not change its acceleration. So if your hauler's maximum velocity if 100 m/s and you web it down to 50 m/s, it will now only require to accelerate to 37.5 m/s to enter warp. Thus freighter and transport ship pilot are able to use webifying alts to make their bulky ships enter warp in just 2 seconds. If you are using out-of-corp alt this does require that you first get it flagged first by jetting cans, so that you don't get Concorded in empire space for applying webs.

Professional haulers also train their alts to have some basic leadership skills. This way when you are ganged together and are in the same system, your hauler or freighter will have 8-10% more shield and armor hit points as well as 8-10% better agility.


How to double-wrap packages

Please note: While double wrapping items is ok, triple wrapping will not work. If among your items you have a secure container, and you have already created one courier contract with it packaging it into plastic wrap, it will not allow you to create a second courier contract with this package because it contains a can inside. This would count as triple wrapping (can-wrap-wrap) and so you will get an error message about a "populated container". If you are trying to double wrap items make sure you don't wrap secure cans along with them. Because secure cans count as one layer of wrap already, to fool cargo scanners you only need to wrap them with one courier contract (one layer of plastic wrap) anyways, so don't try to double wrap secure cans. Please note: You cannot double-wrap assembled ships. You can wrap them with 1 layer of plastic wrap but not 2 layers. 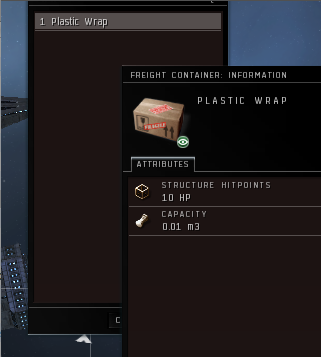 Scanning contents of a doubly wrapped package only shows plastic wrap on scan but none of the items inside of it. Note that neither the real volume nor the name on the wrap are revealed to whoever is scanning cargo.

Trading hubs are locations where you can find a great variety of items selling for cheap prices. Cheap prices are due to higher turnover volumes of goods sold at a trade hub. Occasionally however trading hub markets get price fixed i.e. manipulated by traders who buy out all of the stock of some particular item and price fix it at 2-3x its original price. When making purchases in trade hubs, you might want to check price history graph of the items you are purchasing to see what the average price has been and whether you are about to seriously overpay.

The following link contains a list of all major and minor trading hubs in game: EVE's Trading Hubs