PVP in Eve generally requires the tackling of targets, and one of the most common places to catch targets is when they jump into you through gates. Gate tackling can be quite challenging against agile, fast, and cloaky targets. This guide will help you maximize your chance of success when trying to catch those who don't want to be caught on gates. Of course, in many situations the chance of success will still be very low, but the techniques that follow can shift the odds a bit in your favor. 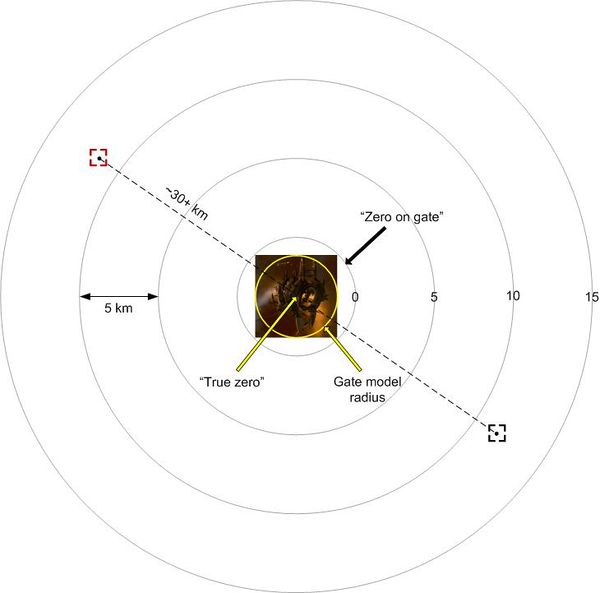 In the above diagram, we can see that the question of being "on gate" is actually quite complex. When you warp to a gate and land at or near 0 on your overview, you are at what "zero on gate." But there is space between the gate model and this zero radius, so you can actually get closer. For example, you can power-approach gate until you bump into the model, at the gate model radius. Even then, you aren't at the center of the gate, and you can actually get even closer. For example, an intrepid frig can sometimes clamber through some gate models to sit at the absolute center, which I refer to as "true zero." Depending on the size of the gate, the distances between true zero, the gate model radius, and zero on gate can be many, many kilometers. The figure above is just an example of how the distances may look.

At this point it should be evident where the remainder of this article is headed. When trying to catch stuff coming through a gate, it really matters where you position yourself in relation to the gate. We present three cases below.

When your fleet lands on a gate, and there is any chance at all of a target jumping into system through that gate, spread yourselves around the gate, ideally at ~2500 m (or greater if you only have scrams and won't need to be in jump range). DO NOT sit like unmotivated lumps at the spot you land and hope that anyone coming through will spawn close to you. Because he probably won't, and in the worst case, he will come in over 20km from you. This spreading-out behavior should be automatic, and kind of "brownian" in that it doesn't have to be perfect, but at least get better coverage than you initially had when landing.


Of course situations can be more complicated and the above is not a hard-and-fast rule. If the incoming target is a cloaky ship, and you have a large enough gang, it can be better to spread out ~10-12km off gate to improve your chances of decloaking him after he recloaks (or preventing a recloak in the first place). If your fleet has only short scrams and no long points, sitting 2500km off a gate may be too close to catch targets, and you'd need to spread out a bit more. If you are worried about a target crashing gate and going back through, you need to split your fleet tackle in both systems appropriately, and communicate clearly what's going on on each side. But that's worth a whole different discussion for another time.

When you are the primary light tackle on grid (Interceptor or other fast tackle frig) and have a long point, you should be sitting as close to true zero as possible without getting hung up on the gate model. You should NOT stay put where you land on gate, and DEFINITELY NOT orbit the gate at ANY distance. When the target drops gate cloak, you want to be reasonably equidistant from all of his possible positions. If you are orbiting gate, he will wait until you are at the far point of your orbit before decloaking. He now has two advantages in getting away: he has a better chance of being out of tackle range, and your momentum is carring you in the wrong direction to approach him quickly. This becomes even more critical when trying to decloak a cloaky a target entering system.

There is a caveat for case 2, which I alluded to by saying "without getting hung up on the gate model." In most cases it is actually not desirable to be too close to true zero, even if you aren't touching the gate model. The closer you are to the gate model, the more of your pursuit vectors are cut off by the model. For example, Minmatar gate models tend to block more pursuit vectors than Amarr gate models. It is therefore actually a matter of judgement to find the best compromise between centering yourself and still being able to approach most targets. If you have two light tacklers available to cover the gate (assuming the side of the gate in the other system is already covered), the best option is to position yourselves on opposite sides of the gate model, either top/bottom or side to side. At this point, however, we are starting to talk about Case 1 again. 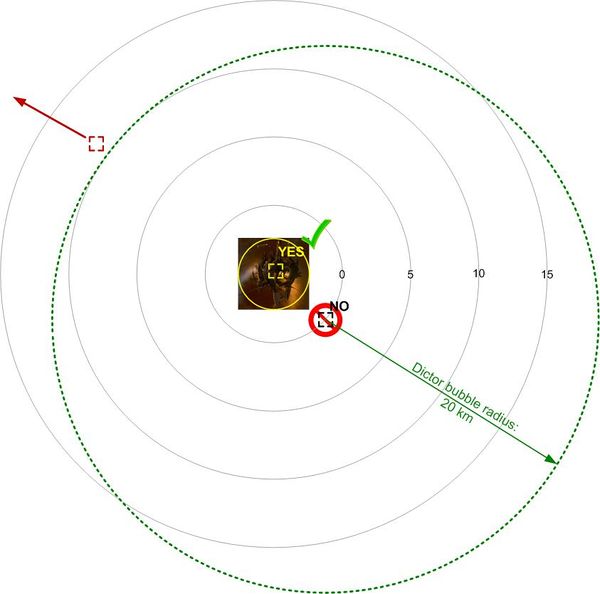 When you are the lone dictor or HIC in fleet whose primary purpose is to bubble targets jumping through a gate, you should be sitting as close to true zero as possible. And in many cases, cutting off your pursuit vectors isn't even a concern (e.g., you aren't expected to scram or shoot the target, or you plan to immediately jump through to the other side in your dictor). DO NOT sit offcenter at the "zero on gate" radius, because based on my experience your odds of catching the target will be pretty bad. I can't count the number of times a dictor stays put where he lands on gate, bubbles up, and then the target decloaks outside of his bubble on the far side of the gate.

There is a caveat for case 3, and it has to do with the size of the gate in relation to the HIC/dictor's bubble radius. A dictor's bubble radius is 20km, and a HIC's radius can be 16-24 km. So, for larger gates (e.g., regional or constellation gates) and smaller bubble sizes, it is possible for ALL incoming ships to be outside your bubble radius if you sit at true zero. In these cases you do actually need to sit offcenter from the gate and hope that the target's jump-in position is on your side. Or, for situations where you have two dictors, as with the intys example above, you can put the dictors on opposite sides of the gate model for better coverage.

Conclusion: be the spider

Think about it: Why do spiders sit at the center of their web?

Of course there will be exceptions to all of the above, but in general this is the best way to grab stuff on gates. There are also behaviors I didn't describe but are still valid. For example, if your fleet is large enough (think PVP-U) then it may be good to have everybody orbit gate at 12km because of the sheer density of coverage you get with 50+ ships.