Probes can be dropped anywhere in space by loading them into a launcher and activating it just like a weapon. They cannot be targeted, shot, or scooped by anyone else. Probes can be seen on ship scanners and can only be launched while uncloaked. It used to be possible to have both Core and Combat probes out by deactivating one set to allow the other to function, but that is no longer the case. The game allows the probe launcher to cycle but not for the probes to launch. 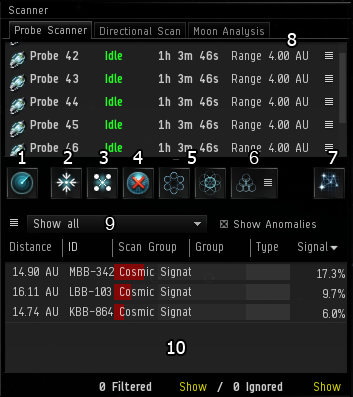 Additional probes (up to the 8 maximum) can provide additional signal strength, depending on their geometry relative to the other probes.