I want to thank AlleyKat for his great eve-video creation tutorials which made the basis for further subject research.

Almost everyone is aware of basic camera works in EVE client, like rotations, zoom (anyway it's covered in eve tutorial). Basic zoom (which is actually not a zoom but camera reposition) is performed by whether pressing and holding left and right mouse buttons (LMB+RMB) and moving mouse up and down or scrolling mouse scroll wheel. But there is one nice feature of EVE client like true zoom (actually changing the camera's focus distance in terms of optics). it's preformed by pressing and holding Ctrl+LMB+RMB and moving right(zoom in) and left(zoom out). That feature is nice when you do some fancy camera works and shoot eve movies, but it might be useful in other areas. 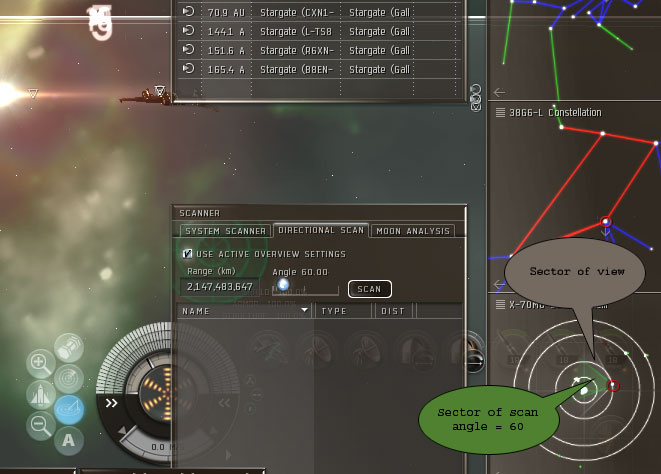 When you press-hold Ctrl+LMB+RMB and move mouse to the right, camera zoom factor changes and grey sector dynamically reflects that change. 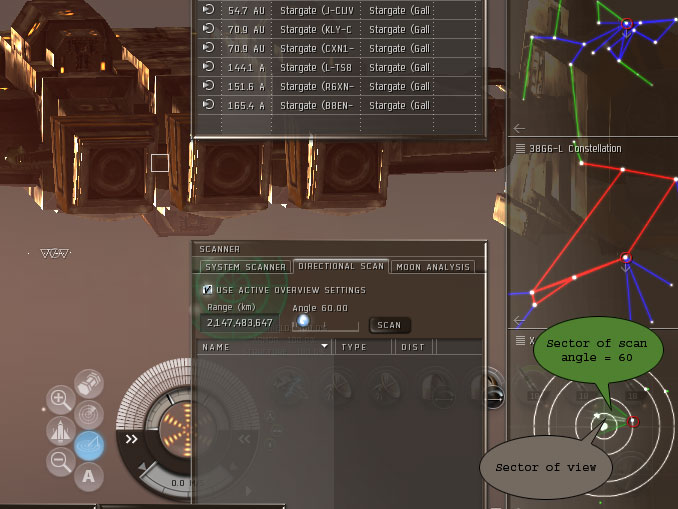 When zoom is maximal and scan angle is minimal - we have both sectors of the same size (actually view sector is a bit bigger, something around 7 degrees). These parameters give us sort of 360 sharpshooting setup. 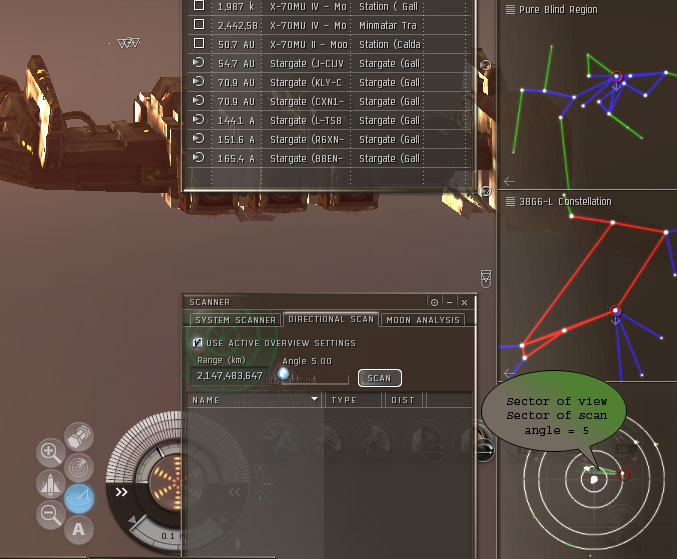 With zooming technique one can create bubble BM with high level of precision.

At the time of writing bubbles showed the ability to affect warp exit point at the distance up to 200km. So we will focus on creation of the bubble BM positioned behind the gate and able to catch warps from celestial to gate up to @100km.

To use bubble BM one should warp to that BM and on arrival start approaching it to remove 2km deviation effect. That approach will introduce ship trajectory oscillation effect. To counter it one can perform approach to the gate and then again approach bubble BM - that technique will introduce oscillation along gate→gate axis which is perfectly acceptable. Ship is at position for deployment of "perfectly" aligned bubble.

It might get quite frustrating to watch "smart kids" break through your small gate-camp just bouncing of nearest planet instead of just warping straight to the gate. What if you've just missed blockade runner with fat faction loot :), because he's just bounced of the planet.
Here is how to create drag bubble for planet bounce. 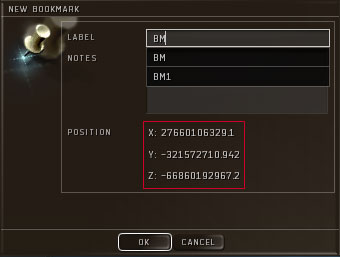 Everyone ever creating bookmark might notice those lengthy rows of digits in BM creation menu. Those are the coordinates of current position inside current solar system. Every single system has sun in its coordinates origin. Axis X faces West, Y - Up, Z - South if you observe solar system with F11 minimap open (for N-E-S-W reference). Integer part of coordinate is measured in meters.

CCP provides Toolkit for community usage. It includes also static data dumps. We will use the info about station position (coordinates of anchor point), relative position of undock spawn point and coordinates of undock vector.
Note: coordinates of player built outposts are not included into dump, but bookmark creation if perfectly possible but a bit more involved
To create digital bookmark one reads data about the station of interest from table in Appendix A. Numbers from dockOrientation* columns give us the estimation of undock vector.
Lets analyze Station ( Caldari 5 ) information.
dockOrientationX = -2.31896729019e-006
dockOrientationY = -0.239630699158
dockOrientationZ = 0.970864117146
Multiplying every value with 1'000'000 (=1000km) we see the difference along axises.
along X axis = 2m east. That deviation can be easily neglected
along Y axis = 239.63km down.
along Z axis = 970.86km south.
So the possible procedure is:

This table shows all entries of "station" type. Some entries are not present ingame.