Understanding Your Ship and Weapons

The signature radius of your ship can be looked up in its information window. At first glance this number, measured in metres, seems to simply give players an impression of how big each ship is. However there’s much more to it than that! The signature radius of a ship influences how much damage it takes from guns and missiles, how easy the ship is to scan out, and how quickly it can be target locked.

Imagine trying to throw a sandwich at a Stop sign. Easy way to do it is face on, so you’re throwing it at the front of the sign; hard way would be throwing it side-on where the sign is only a few millimeters across.

Now imagine trying to shoot a Tempest battleship. Tall and long, the Tempest should be much easier to hit ‘side on’ than from the front as it has a much larger cross section when viewed sideways (image 1 and 2 below). EVE does not work this way. The game sees all ships as spheres (clue lies in term 'radius'); as far as EVE is concerned your battleship is just a well-armed ball with a 400m radius as is shown in image 3 below.

In EVE, it is preferable to have a small signature radius. A larger ship 'catches' more damage in combat, is easier to scan down, are generally slower and less agile, and ships with a smaller signature radius quickly achieve target-locks on larger ships.

It is easy to see by comparing different ships that the signature radius is relative to the ship class. Frigates and interceptors have inherently small signature radius while battleships and capital ships are much larger in comparison.

Base sizes of different ship classes assuming no other factors (skills, modules, etc.) are affecting their sig. rad.:

Base sizes of drones:

Considering the lists above, we can see that increasing a ship's signature radius is generally easier than decreasing it.

All guns in Eve have an ‘area of effect’ similar to that of a shotgun or an artillery shell. Imagine shooting a tennis ball from 30 feet away with a shotgun – sure, the ball would get blown to pieces, but it would only have been hit by a few of the gun's pellets. Most of the pellets would have spread out a little in transit and miss the tennis ball.

In Eve, it is easy to imagine this being the case with a blaster – after all, they spray out hot plasma and it is intuitive that it could spread. However even artillery shells in Eve have this ‘area of effect’, known as the Signature Resolution. One way to think of this is to think of the artillery shell as an explosive charge. Similar to real life artillery, they don’t simply hit the target like a single, solid bullet does. They hit then explode. That explosion could be small or large, and on really big guns the explosion is really big.

Our tennis ball example above describes the situation of a “Really Big Gun” shooting a little ship. For example, a 1200mm Artillery Cannon I has a signature resolution of 400m, and a Cormorant destroyer has a Signature Radius of only 90m. Therefore the Cormorant will only be subject to a small portion (up to 90m) of the damage that the gun is trying to deliver, as the gun’s total damage will be spread over a circle with a 400m radius, and the destroyer is only 90m in size. 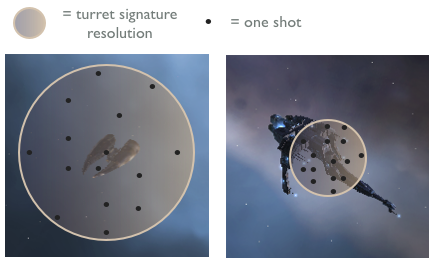 Another factor that decreases damage delivered by missiles is the ship's velocity. If the target's velocity is greater than the explosion velocity of the missile it will take reduced damage. This effect is combined with the effects of signature radius on missile damage.

The length of time it takes for one ship to lock another is determined by the targeting ship’s scan resolution and the target's signature radius. The higher the scan resolution, the faster a ship will lock onto targets, and the higher the signature radius of a ship, the faster other ships will lock onto it. This is why a frigate can lock a battleship in very little time, but a battleship will take MUCH longer to target lock a frigate. The length of lock time is very important if you are trying to catch someone.

Imagine you are attempting to use a satellite to find a vehicle lost in a forest. The two things that will make it easier to find will be the resolution of the satellite’s camera and the size of the vehicle – a fire truck will be easier to find on a high quality picture than a motorbike on a low quality picture.

Generally, Minmatar ships have the highest sensor resolution and lowest signature radius characteristics than ships of other races within the same class. This makes them be able to lock targets quicker than ships of other races, while requiring the longest time to get locked back. Caldari ships generally have the lowest sensor resolution in game. Gallente and Caldari ships have the biggest signature radii in game.

This table compares the locking times of a few common ships. These are rough numbers, using the raw ship attributes without skills applied. 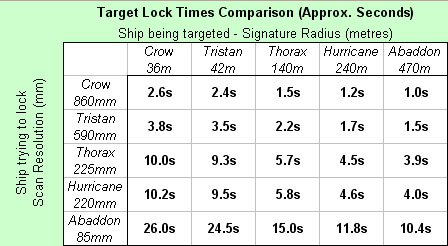 Note: Other factors such as the distance from the probes to the target and the probing pilot’s skills and ship fittings also contribute to the signal strength returned on a scanner results list. A 100% signal strength is required to warp to a probed target.

ECCM modules and sensor backup arrays can be fitted to ships to increase their sensor strength, making them both more difficult to jam and more difficult to scan down. ECCM are mid-slot active modules that come in omni as well as racial varieties. Backup arrays are low-slots passive module that come only in racial varieties. When fitting a racial ECCM or backup array, be sure to fit the correct one for your ship type!

For the totally obsessed among you, here are the formulas behind the theories above.

According to Akita T, the damage formula for turrets is:

In not so many words, what this means, is that:

According to Stafen, the damage formula for missiles is:

According to Blazde, the time it takes for one ship to lock another is determined by:

According to Trillian McMillan, the percent chance for ECM to work is:

If all your jammers are equal, E1=E2=En, then this formula is simplified to: