Original article by Ryysa. Updated and edited for content by Admiral Phobos, Azual

This article is intended to provide an in-depth look at all forms of electronic warfare, along with the calculations required to predict their effects.

Warp scrambling prevents another ship from entering warp. This is the primary type of ewar used in any kind of pvp, because it allows you to prevent your target from escaping from an unfavorable situation - if you can't keep your target from running away, killing them becomes very difficult!

The most common forms of warp disruption are the targeted modules. These come in three forms:

Warp disruption can also be found in the form of bubbles. For more on bubbles, see the Bubbles and Warping article (PvP-BASIC article).

With the exception of 'deep space transport' ships, all ship have a base warp core strength of 1. Each warp disruptor or scrambler activated on that ship deducts from that either 1 or 2 points respectively. Once this value is reduced to 0 or lower, the ship can't enter warp.

Bubbles follow a different mechanism, however that is outside the scope of this article.

The counter to standard warp disruptior/scrambler modules is the Warp Core Stabilizers. Each WCS adds one additional point of warp core strength to the ship. Meaning that if a ship has one WCS fitted and no natural bonus to warp core strength, you will need 2 point of disruption to keep it from warping.

Deep space transport ships have a natural +2 to their warp core strength.

The only direct counter to bubbles is the interdiction nullifier subsystem for t3 cruisers, however, due to bubbles having limited range, a speedy ship configuration is an indirect counter.

Stasis webifiers quite simply decrease the speed of a the target ship.

Stasis webifier modules ('web') are a midslot module, and the only common form of stasis webification. These have a range of 10km and reduce speed by between 50% (t1) and 60% (t2).

Webifying also comes in drone form. However the effect is very weak (especially when stacking penalties are applied) and these drones only come in heavy size, meaning anything that the drone can catch, probably doesn't need slowing down anyway.

This is fairly simple. Each stasis webifier has a certain speed reduction amount.

Note that like many forms of ewar, webifiers are affected by stacking penalties. Please refer to section 9 of the guide for more info.

Also, the slowdown of the ship is not instant. It is gradual and depends on the mass and agility of the target ship. It is entirely possible for a webified ship to be carried back out of web range by its existing momentum.

While stasis webififers are common on all ships, it is the speciality of the minmatar t2 ewar ships:

ECM is a form of chanced based ewar designed to disrupt a target's locking capability.

The most common form of ECM is the targeted ECM jammers. When successful, these break all current locks which the target has established, and prevent it from locking again for 20 seconds. They come in two forms:

The less common module is the ECM Burst. This is an area of effect weapon with a relatively high jamming strength (6 for the t1 version). However, it only breaks locks and does not prevent re-locking. Note that only one ECM burst may be active at the same time, meaning that fitting more than one is fairly pointless.

Motherships (soon to be renamed supercarriers) can fit a specialised 'remote ECM burst' which has the same effect, however it is much larger, more powerful, and is centred on a target ship rather than the user.

ECM can also be found in the form of:

Jamming is chance based. Every ship in eve has a characteristic known as sensor strength, which is compared with the strength of the jammer vs their racial sensor strength.

This is calculated as follows:

In case of ECM bursts, a separate chance roll is performed for each ship in range.

The chance to jam a target with multiple jammers is a simple deduction of Bernoulli's formula:

Or to put it simply - the chance of each jammer failing, multiplied together, and subtraced from 1.

ECM is the realm of the caldari. The following ships get a bonus to ECM in some form:

There is a direct counter available - ECCM, which gives a percentual increase to a ship's sensor strength, making it hard to jam it. Projected ECCM can also be used, which is a remote module with a higher effect than local ECCM, but for obvious reasons will be ineffective if you are jammed yourself.

Sensor Dampening is also available on drones and come in three flavors, from small to heavy, however due to heavy stacking penalties their effects are fairly limited, and they are rarely used.

Each sensor dampener reduces a targets locking speed and/or range by a given percentage.

To calculate the Optimal range reduction for one dampener used against a target, the following formula is used:

This can be calculated quite simply as follows:

Note that while this is simple as far as targeting range goes, locking time is not linear with scan resolution. For those interested in a complex formula, the calculation for lock time is as follows:

Where X = scan resolution of your ship with positive bonuses applied, Y = sig radius of the target, M the scan resolution reduction multiplier of the dampening module or drone and T the locking time.

While all ships can be effective with dampeners, the gallente have several ships which specialise in their use.

From these examples, you can quite clearly see just how effective remote sensor dampeners are!

Tracking disruptors ('track)' are targeted midslot modules. They reduce both tracking speed and optimal range of the target ship by anything from 18% (t1) to 20% t2. Like remote sensor dampeners, these modules can be fitted with scripts which double one attribute in exchange for removing the other.

Like many other forms of ewar, tracking disruption is available via drones, however like dampening drones the stacking penalties and reduced effectiveness mean that they are rarely used.

Each tracking disruptor reduces the tracking speed and/or the optimal & falloff ranges of turrets.

The effect can be calculated simply as follows:

While tracking disruptors can be effective any any ship, it is amarr ships, which receive bonuses to them:

To put this in perspective, here's a graph showing the damage output of this megathron tracking the crucifier with a transversal velocity of only 35m/s (10% it's non-afterburning speed): 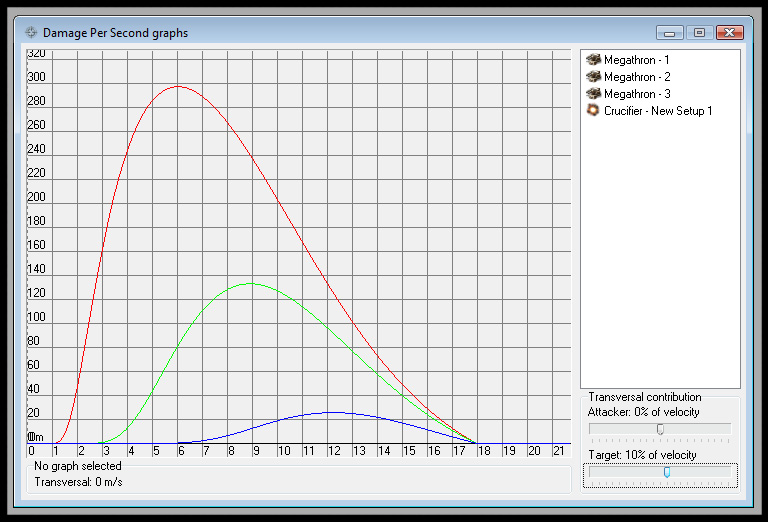 As you can see, the mega goes from being a serious threat, to being a paperweight at the hands of a single tech 1 frigate.

Target Painting increases the signature size of the target, making it easier to hit, and increasing friendly locking speed against the target.

Target Painters 'paint' are midslot modules, which increase the target's singature radius by between 25% (t1) and 30% (t2).

The working mechanism of target painters is fairly simple.

While target painters are effective on any ship, it is mainly minmatar ships which receive a bonus to them:

Let's try to illustrate why target painting is sometimes useful. A raven shoots a caracal with a torpedo.

If our torpedo had a damage output of 500, it would now only do 181.25 damage against the caracal.

Now, let's assume the raven is using two t2 target painters without any advanced skills on the caracal.

If our torpedo had a damage output of 500, it would do ~ 297.1 damage after the painters have been applied, which is about 64% more damage than without the painters.

Cap draining with Nosferatus or Neutralizers reduces your targets cap and in some cases adds it to your own.

The mechanic for these is simple, each of them have a cycle time. Every cycle time seconds the cap amount is drained from the enemy.

There is a major difference between NOS and neuts however:

In case of NOS, the cap drained is added to your own, but only as long as you have less cap (by percentage) than the ship you are draining cap from. Meaning that once you have (percentually) more cap than the target ship, no capacitor is drained from it anymore.

In the case of neuts you sacrifice a certain amount of energy but get a much bigger effect on the targets capacitor and it also removes energy from their capacitor when you have more energy than they do.

For efficient capacitor warfare it is smart to combine neutralizers and nosferatus.

Also, one should mention the existance of Talisman pirate implants.

These implants reduce the cycle time of your Nosferatu and Neutralizer modules.

According to Entity's Pirate Implants FAQ a lowgrade set will result in a 26.94% reduction and a highgrade set in a 38.12% reduction of module cycle time.

While cap warfare can be effective on all ships, some amarr ships tend to get a particularly hefty bonus to them:

There are no direct counters to cap warfare, however there are two viable indirect methods of countering it.

Many of the EW modules have a falloff range.

To determine the chance of success in falloff range, we use the following formula:

As a result, you will get a multiplier. This is a chance multiplier. In case of jammers, just multiply the calculated chance by it. In case of other modules, this will simply show you the chances of the module succeeding at a given range.

Many of the EW modules are stacking penalized (essentially all the percentage based modules, e.g. webs, damps, tracks).

So if calculating the effect multiplier with multiple modules, you need to keep the stacking penalty in mind.

For calculating the multiplier we use the general stacking formula:

Where M(1..n) are the effect multipliers of module n and S(1..n) are stacking penalty multipliers for module n. The modifiers for the first four modules are as follows:

The formula to calculate the stacking penalty for the nth module is:

Where n is the number of the module modifying the same attribute and S the stacking multiplier applied to that module.

For this reason, it is generally considered ineffective to have more than 3 modules stacking on the same attribute (in most cases the fourth module can generally be replaced by something more useful).

One useful workaround in large fleets is assigning scripts across the fleet so that half are using one script and half are using the other for a given module. For example, instead of having 6 unscripted damps (in which case the 4th has a very low effectiveness, and 5 and 6 are almost useless), you can have 3 damps with range script, and 3 damps with scan resolution script, and never have more than 3 modules stacking on the same attribute.