This page is intended to provide a brief overview, along with diagrams, of tracking, spiraling, and orbiting. Spiraling and orbiting are of special concern to small, fast ships that often get used to approach and tackle targets for a gang. Understanding the basics of tracking and how it relates to the way you approach other ships and the way you orbit them will let you minimize the damage you receive, keep alive, and meanwhile put a point on your target or get within web/scrambler range.

For more detailed information on tracking, read this article: HERE.

All turrets in game have this property called tracking. Here is a close-up picture of an Amarr dreadnought, Revelation, firing off its Giga Beam Lasers in all its glory. Imagine for a second that it is not trying to kill a stationary POS, but instead it is trying to hit a moving target. To track the target's movement each one of those Giga Beam Lasers will have to move around its axis, but because they are so big and unwieldy it will take them quite a bit of time to move a few degrees. 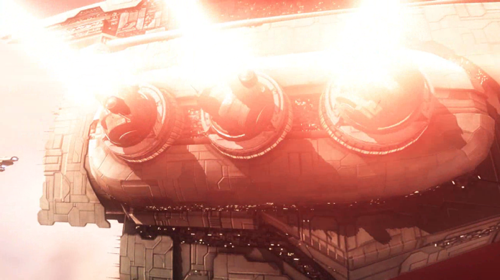 How fast each turret moves is called its tracking. Tracking is measured in radians per second (1 radian = 57 degrees). The more radians a turret can cover per second, the greater the probability is that it will hit a target. A turret with tracking of 0.05 rad/s will be able to track a moving target better than a turret with tracking of 0.003 rad/s, hence it will be able to place more hits. If a turret places more hits, this increases its damage output. Thus tracking affects how much damage a ship's turrets are able to do to a target.

If you would like to see more on how tracking works, visit the Tracking 101 Visual Guide


Note: These numbers do not take into account player skills and ship fittings. Motion Prediction skill can boost these figures up by 25% and because the bonus of this skill is listed in percent it will also amplify the difference between these tracking figures. Tracking computers can boost tracking by about 30%; tracking enhancers can boost it by approximately 9.5%.

Small fast ships can exploit the inability of larger-sized weapons to track well in order to reduce their damage output. They do this by keeping a high angular velocity with respect to target ship that is greater than target's tracking.

The problem with using transversal velocity however, is that it doesn't scale with distance. A ship with a transversal 100m/s which is only 10m away is going to be very hard to track - even though he is moving slowly, he is effectively orbiting you very quickly. However, the same ship with a transversal of 100m/s 10km away would be almost stationary from your perspective, and would be much easier to track.

To solve this problem, we instead use angular velocity (both angular and transversal are columns available in your overview). Angular velocity is quite simply transversal velocity divided by distance to the target (i.e. the radius of their orbit). This gives you a value in radians per second. Sound familiar?

Since both turret tracking and angular velocity are given in radians per second, tracking becomes far easier to understand.

Allow me to present an example: if an Incursus orbits a Maller at a velocity of 2000 meters/second and at a distance of 2000 meters, the angular velocity of the Incursus (transversal divided by distance) will equal 1.0 radians/second. Now, if the tracking of the Maller's turrets is 0.03 radians/second, it will have significant difficulty placing hits on the frigate because the frigate's angular velocity outpaces its tracking.

In other words, the Incursus is orbiting the Maller faster than Maller's guns are able to turn.

If angular velocity of the Incursus is greater than the Maller's tracking, this does not mean that the Maller will not place any hits on the Incursus at all. It will still be able to hit the frigate, just a lot less often. Even a dreadnought firing at an orbiting frigate still has some probability to hit it, but this chance is so small that for practical purposes we say that it is equal to zero. The greater the disparity between the two numbers, the angular velocity of your ship and the tracking of the turrets on the target's ship, the smaller the probability is that it will hit you and the less damage you will receive.

So where does spiraling fit in, and how does it help?

You can see how you are doing by enabling the Angular Velocity column in your overview. In the picture below I am orbiting a gang of three battleships. I predict their tracking is probably in range of 0.03-0.07 rad/s so I am doing very well against the Redeemer and the Nightmare. I am not doing so well against the Abaddon that is sitting at a bit of a distance. If Redeemer and Nightmare were instead cruisers armed with medium-sized weapons I would be doing marginally ok as their tracking would probably be in range of 0.10-0.18 rad/s. 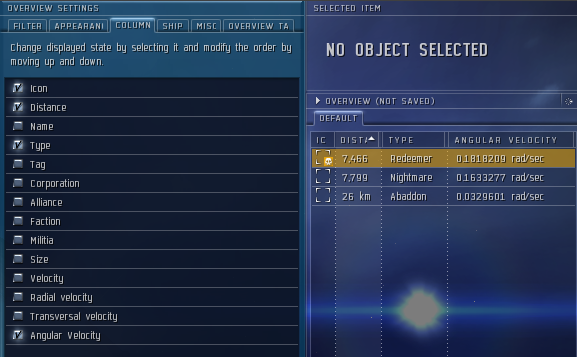 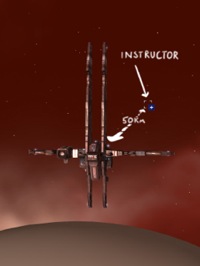 Once your ship is roughly level with the target, rotate your camera again and repeat the process. Once you have approached 30km away from the target you have the option of switching to picking orbits from the right-click menu: 30km -> 20km -> 10km -> scram/web. It is advisable, however, that you continue approaching the target piloting your ship manually for as long as possible. The navigating systems of ships in EVE have a tendency of picking a random direction every time you change orbits via r-click menu. This means that when you are orbiting a target at 20km and select a 10km orbit your ship can reverse direction 180 degrees and your angular velocity will drop. At this point you may get hit and take a lot of damage. Thus it is advisable to guide your ship into correct orbiting distance manually for as long as possible. To get better at manually directing your ship, practice the spiraling approach on a friend or any miner you can find in a belt sitting still.

Things will happen quite fast, especially once you get close, so don't worry if you aren't 100% accurate. Once you are just outside your desired orbit range, you can click orbit and you're done! Your final path should look something like this:

Watch the angular velocity column in your overview. If you can keep it above about 0.15 you should be able to evade most damage from medium and large turrets.


When Spiraling Is Not Useful

Remember that while spiraling is a very useful tactic, there are some situations where it is not be necessary or even counterproductive. For example:

Missiles are self-guiding and missile launchers have no tracking. When tackling a missile ship, you should aim to achieve as high a velocity (regular velocity, not transversal or angular) as you possibly can. Careful: this doesn't always mean that you should turn on your microwarpdrive, because a mwd will boost your signature radius 5x increasing the damage you take from oversized missiles. The fastest path into the tackling range of a missile ship is a straight line.

Once you have approached the target by spiraling down on it, you will need to set your ship into orbit ot continue keeping up your angular velocity. In PVP-BASIC you should try to orbit the target somewhere in range of 6-10km. In real PVP how close or far off you choose to orbit will depend on several factors, such as your and your target's tracking and optimal range, whether the target is potentially armed with webifier and warp scrambler, and whether you need to get into your own web/scram range.

In order to maintain a full speed orbit around any entity, you need to consider the effect of inertia. As your ship accelerates in a straight line, it builds up inertia that resists the ship turning. The more inertia you build up, the longer it takes you to turn. Since inertia is a function of (mass x velocity), you have to either reduce velocity or mass to turn your ship faster. The faster you can turn your ship, the closer it can orbit to a target. If you put a microwarpdrive on a Thorax and tried to orbit an asteroid at 2000m, you would go flying off into space because it couldn't turn fast enough. The Thorax would move in and out of the orbit in an elliptical rather than circular pattern that would consistently deteriorate. A frigate bearing a microwarpdrive would have similar problems.

Sometimes you want orbiting range to be something other than defaults available from r-click menu (500m, 1000m, 2500m, and so on). You can change this distance via Selected Item window. Click on any celestial object that is within 150km of your ship. Then right click on the orbit icon in Selected Item window and pick "Set default orbit distance". Type in your desired orbit distance in meters, for example, 12.5km as is show in picture below. Now if you approach another ship and click on the Orbit icon your ship will get into 12.5km orbit around it.